is an optimizing static compiler for both the Python and the extended Cython programming language (based on Pyrex). It allows you to write C extensions for Python as easy as Python itself. The Cython language is a superset of the Python language that additionally supports calling C functions and declaring C types of variables and class attributes. This allows the compiler to create an efficient C code from Cython code.

Cython yielding performance boosts that can range from a few percent to a large extend, depending on the task at hand. For tasks that are bound by Python’s native object types, the speedups won’t be large enough. But for numerical operations or any operations that are not using Python’s own internal modules, the gains can be massive. The Cython code looks a lot like Python code, by design. If we run the Cython compiler with a Python program (Python 2.x and Python 3.x are both supported), Cython will run it as-is, but none of Cython’s native accelerations will come into play. But if you use the Python code with type annotations in Cython’s special syntax, Cython will be able to replace or substitute fast C equivalents for slow Python objects. 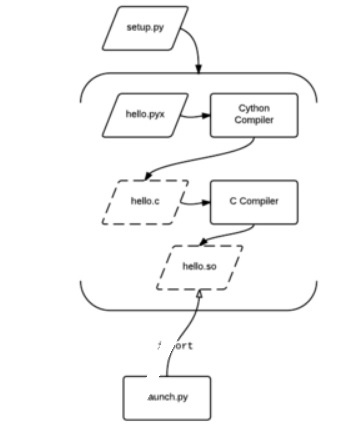 Sample python function to compute the factorial of a number

Cython version of the corresponding function.

There are several tactics to build Cython code:

Let’s look at a simple “hello world” script in a file hello.pyx:

The corresponding setup.py script is provided below:

To build, run python setup.py build_ext –inplace. Then we need to simply start a Python session and do “from hello import say_hello_to” and use the imported function as per our need.

When to use Cython

Now we know how to “Cythonize” a python code, next we need to determine how our Python application or code can benefit from Cython. We must know where to use this.

We can get the best outcomes by using Cython to optimize the following situations in Python functions:

A first step in improving an application’s performance is to profile it—to generate a detailed report to know where the time is being spent during the execution of the program. Python has already provided built-in mechanisms for generating code profiles. And Cython not only hooks into those mechanisms but has profiling tools of its own.

We can get the reports that show, which functions take up the most amount of time in a given Python program from Python’s own profiler,  cProfile. By default, Cython code will not be noted in those reports, but you can enable profiling of Cython code by inserting a compiler directive at the top of the .pyx file with the functions you want to include in the profiling:

We can also allow line-by-line tracing of the C code generated by Cython, but this includes a lot of overhead, and so is turned off by default.

Note that profiling can cause a performance hit, so be sure to disable profiling for code that is being shipped into production.

Experienced Engineer in Innovature with a demonstrated history of working in the Information technology and services industry. Highly efficient to collaborate with clients and in-house agency teams to provide rapid, robust and client-acclaimed user experience on the solutions.

Experienced Engineer in Innovature with a demonstrated history of working in the Information technology and services industry. Highly efficient to collaborate with clients and in-house agency teams to provide rapid, robust and client-acclaimed user experience on the solutions.