According to the PYPL index , Python is ranked No.1 with 32.75 %. Popularity of Programming Language Index is created by observing how often language tutorials are searched on Google. So, lets us look into the reason why python is so popular.

Healthy and Supportive Community
Programming languages that lack documentation and developer support won’t be able to survive. Python has a healthy, incredibly active supportive developer community. For each and every problem, there are solutions on the internet.

The rise of AI, machine learning and data science in the enterprise.
Python can be easily used in AI and Big data which are growing at an exponential rate. Facial recognition and number plate recognition can be easily done these days with the use of OpenCV library. The libraries like Matplotlib, Scikit and Tensorflow will help you to do the Data Visualization and machine learning tasks easily. And one more feature of python is scripting support. Automation scripting can be easily generated in python.

Python is widely used in different application domains
Below is an image inciting where python is being used. 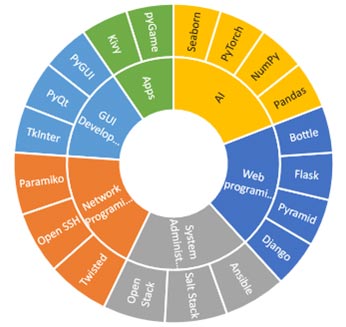 Python is used in many application domains. In the field of Web and internet development python offers many choices for web development, frameworks such as Django and Flask. Python’s standard library supports many internet protocols such as HTML, XML, JSON, Email processing.

Scientific and numeric computing is another area where Python is widely used. Even Python can be used to develop embedded applications

We can summaries as follows, Python is widely used because of these: